Think of it as an Olympic Medal bestowed by the earth

Conservation and the Boy Scouts of America have been partners for a long time. Camping, hiking, and respect for the outdoors are a part of the Scouting heritage. Many of the requirements for advancement from Tenderfoot through Eagle Scout rank call for an increasing awareness and understanding of the natural sciences. Many former Scouts have become leaders in conserving our environment and protecting it from abuse. Right now Scouts are involved in learning about environmental problems and actively working to make a difference.

This awards program was created to recognize those that have made significant contributions to conservation. It was begun in 1914 by Dr. William T. Hornaday, director of the New York Zoological Park and founder of the National Zoo in Washington, D.C. Dr. Hornaday was an active and outspoken champion of natural resource conservation and a leader in saving the American bison from extinction. He named the award the Wildlife Protection Medal. Its purpose was to challenge Americans to work constructively for wildlife conservation and habitat protection. After his death in 1937, the award was renamed in Dr. Hornaday’s honor and became a Boy Scouts of America award.

In the early 1970s, the present awards program was established with funding from the DuPont Company. At that time, the late Dr. Hornaday’s idea of conservation was broadened to include environmental awareness.

The Hornaday Awards are highly prized by those who have received them: Approximately 1,100 medals have been awarded over the past 100 years. These awards represent a substantial commitment of time and energy by individuals who have learned the meaning of a conservation/environmental ethic. Any Boy Scout, Varsity Scout, or Venturer willing to devote the time and energy to work on a project based on sound scientific principles and guided by a conservation professional or a well-versed layperson can qualify for one of the Hornaday Awards. The awards often take months to complete, so activities should be planned well in advance.

The fundamental purpose of the Hornaday Awards program is to encourage learning by the participants and to increase public awareness about natural resource conservation. Understanding and practicing sound stewardship of natural resources and environmental protection strengthens Scouting’s emphasis on respecting the outdoors. The goal of this awards program is to encourage and recognize truly outstanding efforts undertaken by Scouting units, Scouts and Venturers, adult Scouters, and other individuals, corporations, and institutions that have contributed significantly to natural resource conservation and environmental protection.

Since 1917, about 1,100 Hornaday medals have been awarded, of which only 115 have been the silver award and the balance the bronze. The Wildlife Protection Medal was a forerunner to the Hornaday Awards. Dr. William T. Hornaday, an ardent conservationist, established this awards program to recognize Scouts who undertook and completed truly exceptional conservation projects. Earning one is hard work; it is supposed to be; but it’s worth it.

A good idea is to start with the badge and then work up to the bronze or silver medal. You must be a First Class Scout or a Venturer, and you must have a conservation adviser. Then you do your homework to fulfill the advancement requirements and conservation projects you want to complete.

The following merit badges and project categories are the building blocks for a Scout to earn a Hornaday Award. See the Hornaday application for the Venturing requirements.

*FOR THE HORNADAY BADGE, Scouts earn three of the merit badges listed in the top section, plus any two others. Then plan, lead, and carry out a significant project in natural resource conservation, from one of the project categories listed.

*FOR THE HORNADAY BRONZE MEDAL, Scouts earn the Environmental Science merit badge and at least three additional merit badges listed in the top section, plus any two others. Then plan, lead, and carry out three significant projects from three separate categories listed.

*FOR THE HORNADAY SILVER MEDAL, Scouts earn all the merit badges listed in the top section, plus any three others. Then plan, lead, and carry out four significant projects in natural resource conservation or environmental improvements, one each from four of the eight project categories listed.

All By your 18th birthday! 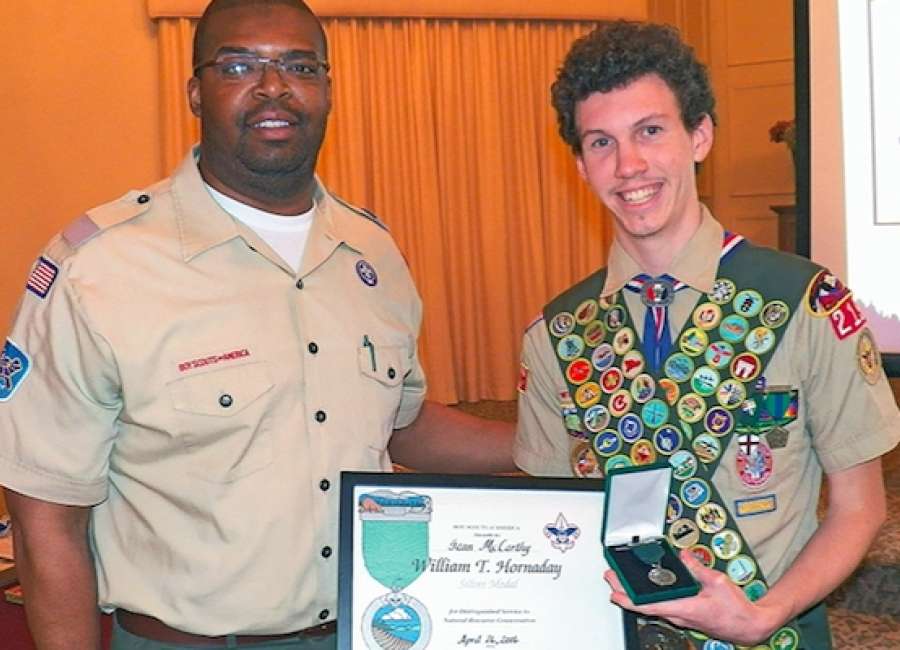 Click Here: To read about our very own Sean McCarthy as he talks about his path to earning the Hornaday Silver Medal.