In March of 1946 the Boy Scouts of America announced the first six square knot awards. These awards were to replace the ribbon bars that were being earned at the time. The list of knots has continued to grow. Some knots have been discontinued and others have been added. At present there are 34 knot awards. These awards are worn on the Scouting uniform in place of the plaque or large pendant that they represent. 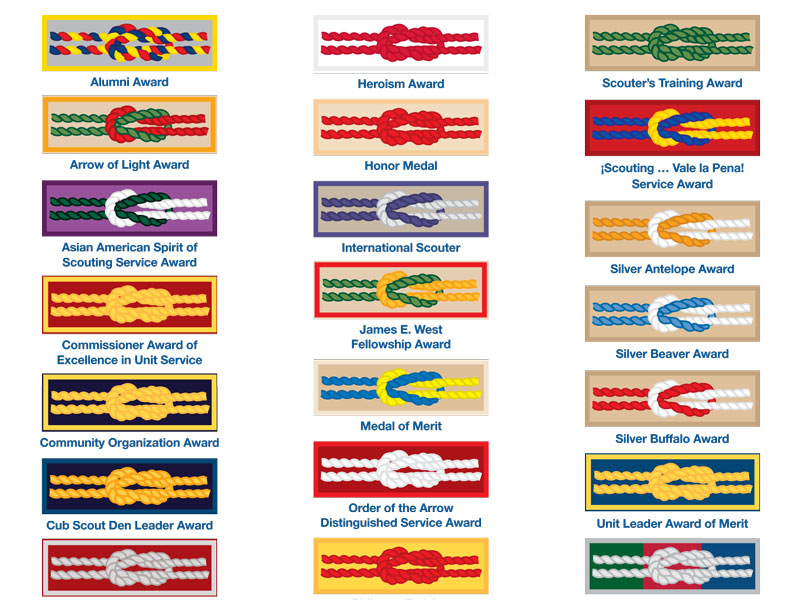 Generally, the knot awards are worn by adult leaders. But there are a few that may be worn by youth members. Cub Scouts and Boy Scouts may wear the Universal Religious Emblem and the lifesaving and Meritorious Award knots. Explorers may display on their uniforms the same honors plus the Explorer Achievement Award knot.

Knots are sewn centered above the top seam of the left uniform shirt pocket, in rows of three. There is no order for wearing the knot awards. However, there is a proper way for each knot award to be displayed. The loop of the embroidered square knot that comes in front of the standing part is always to the wearer’s right. Knots are worn with the distinguishing color (not white) toward the wearer’s right.

Some knots are the same for training or service in different programs. For example, the Scouters Training Award knot is the same for service in Boy Scouting, Varsity Scouting and Exploring, Commissioner Service and District Committee. To distinguish the difference in programs a small device may be worn inside the knot for the appropriate program. If the knot award is earned in more than one program then more than one device should be worn.

Training Awards and their Requirements