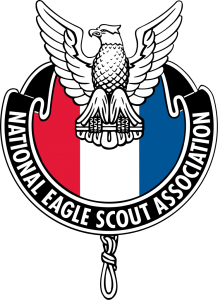 Only those who have been granted the Eagle Scout Award by the Boy Scouts of America may hold membership in the National Eagle Scout Association.

A Few Points About NESA

You will be associated with an impressive group of men, many of whom are now in positions of responsibility and prominence in industry, government, military, business, and education.

Eagles’ Call, the official publication of the National Eagle Scout Association, will be sent to you with articles of interest detailing the latest developments in Scouting and the achievements of Eagle Scouts.

What Are the Costs?

Life membership
The life membership is available for a one-time payment of $250. Members will receive attractive full-color pocket and wall certificates and a gold NESA pin.

Regular membership
A five-year new or renewal membership is available for $35. Pocket and wall certificates, plus a silver NESA pin, are provided in this fee.

Gift memberships
A gift of membership in the National Eagle Scout Association is an important, meaningful, and appreciated recognition of significant achievement. The importance of enrolling new Eagle Scouts cannot be overemphasized. NESA is the only way for the Boy Scouts of America to maintain contact with Eagle Scouts.

Special Handling/Overnight Delivery
Special handling is available at a cost of $25. Overnight delivery is also available for $15. Weekend deliveries will be charged according to current rates incurred by the National Eagle Scout Association. Both special handling and overnight delivery services must be purchased together. Note: This $40 charge is in addition to the membership fee.

In May 1971, a meeting was held in Atlanta to discuss the future of the Eagle program and a steering committee was formed, comprising two national Executive Board members, J. Kimball Whitney and Donald H. Flanders; the president and first vice president of Knights of Dunamis, Dr. Lester Steig and Dr. James Cochran; Ebert May; James Harris; J. H. Biggers; Ken Wells; and three Knights of Dunamis youth members. Using the research study presented by the Research and Development Division under the direction of Wells, plans were formulated for the organization of the National Eagle Scout Association.

A National Eagle Scout Association committee was formed in August 1971, with Whitney and Flanders representing the National BSA Board, James Cochran as national adviser, and John Russell and Robert Salisbury as associate national advisers. It was at this time that Dr. Steig officially stepped down as national president of the Knights of Dunamis and became a member of the NESA committee.

The National Eagle Scout Association was launched with the first NESA committee meeting held in conjunction with the National Council meeting in Los Angeles on May 19, 1972.

Donald H. Flanders of Fort Smith, Arkansas, served as NESA’s first national chairman. In 1973, NESA launched a vigorous membership drive at the National Order of the Arrow Conference and the national Scout jamboree.

The NESA Scoutmaster Award was introduced in 1973 to recognize noteworthy promotion of, and leadership to, the Scouting advancement program in general and exemplary development of Eagles in particular.

In 1974, Thomas F. Gilbane became NESA chairman. He gave strong leadership to the national committee until May 1976, when Dr. Max S. Norris of Indianapolis was appointed chairman. Dr. Norris remained in office for five years.

NESA kicked off the Bicentennial Eagle Scout Roundup program in 1975. NESA also sent a service corps to the world Scout jamboree in Norway.

In 1976, NESA held its second national conference in Washington, D.C., and helped the nation celebrate its 200th birthday. At the 1977 National Scout Jamboree, NESA sponsored a Life to Eagle meeting to encourage Scouts to complete their trail to Scouting’s highest achievement.

At the 1981 National Scout Jamboree, NESA again held a Life to Eagle meeting to encourage the Scouts. NESA also held a membership meeting at the jamboree where Richard W. Kiefer of Baltimore was introduced as the new national chairman, and all NESA members enjoyed a time of fellowship and ice cream eating. NESA also staffed a display on the jamboree midway.

In 1982, NESA celebrated its 10th birthday with a national conference held with the National Annual Meeting in Atlanta, Georgia.

The purpose of NESA has remained the same: to identify Eagle Scouts and to provide a manpower resource for local councils. The primary objective of local chapters is to guide Eagle Scouts of all ages into service within the local council. All BSA councils have membership enrolled in the National Eagle Scout Association.

NESA is young men searching for dynamic and challenging leadership roles. NESA is older Eagle Scouts who desire using their efforts and influence toward forming the kind of young men America needs for leadership. The objective of NESA is to serve—to serve Eagle Scouts and through them, the entire movement of Scouting.